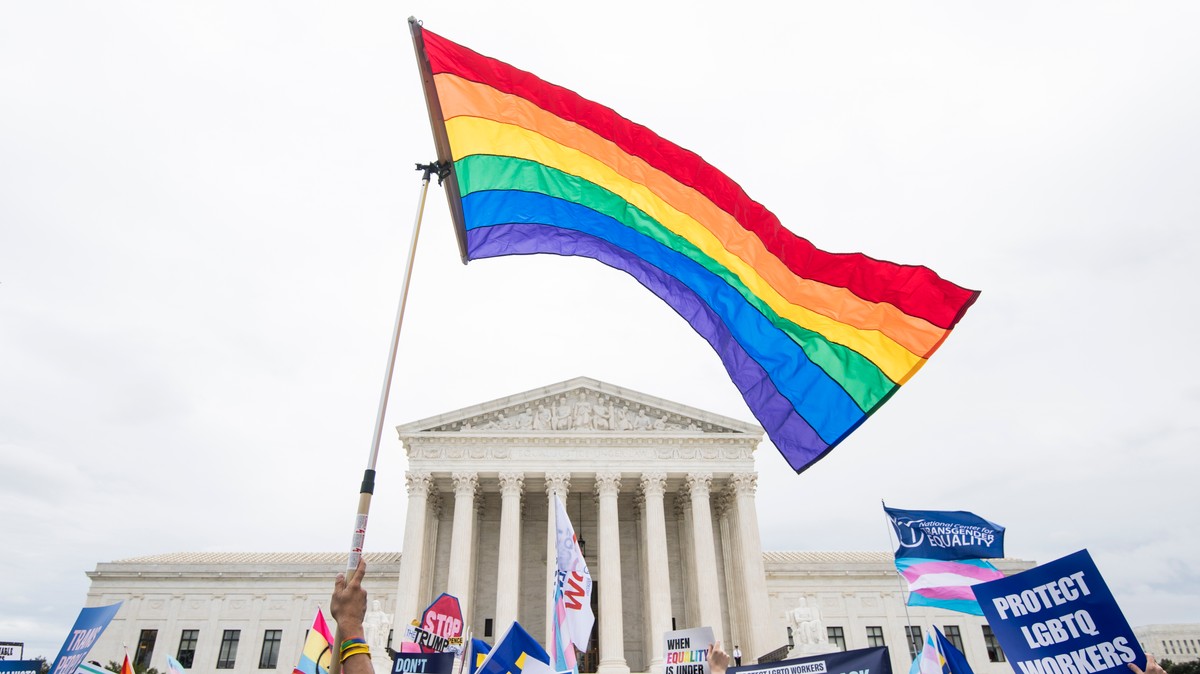 Protesters rally in front of the Supreme Court as it hears arguments on whether gay and transgender people are covered by a federal law barring employment discrimination on the basis of sex on Tuesday, Oct. 8, 2019. (Bill Clark/CQ-Roll Call, Inc via Getty Images)

The Supreme Court’s right-wing majority on Tuesday ordered Maine taxpayers to begin directly funding sectarian religious schools, including those that openly discriminate against LGBTQ+ people and require their teachers to be born-again Christians.

“This Court continues to dismantle the wall of separation between church and state that the Framers fought to build,” Sotomayor wrote in her dissent.

Maine’s system of public education allows rural communities that have no public secondary schools to either allow parents to send their kids to nearby school districts or pay tuition at private schools that, as the Maine law said, must be “nonsectarian school[s] in accordance with the First Amendment of the United States Constitution.”

The two Maine schools in question, Bangor Christian Schools and Temple Academy, are explicitly religious schools. Temple Academy’s mission statement says the school “exists to know the Lord Jesus Christ and to make Him known through accredited academic excellence and programs presented through our thoroughly Christian Biblical world view.” Bangor Christian Schools began as a ministry of Bangor Baptist Church, according to the school’s website.

Furthermore, as Breyer wrote in his dissent, the two schools “have admissions policies that allow them to deny enrollment to students based on gender, gender identity, sexual orientation, and religion, and both schools require their teachers to be Born Again Christians.”

Roberts wrote in his opinion that Maine could solve the problem by building and operating public schools in those communities that currently have none. But as it stands, Roberts said, “the program operates to identify and exclude otherwise eligible schools on the basis of their religious exercise.”

The Carson decision fits neatly with the hard-line conservative majority’s previous rulings forcing taxpayers to subsidize private religious schools. In 2020’s Espinoza v. Montana Department of Revenue, Roberts wrote an opinion overturning a regulation that barred Montana parents from using a state-funded scholarship to pay for religious schools. And in 2017, the Court ruled in Trinity Lutheran Church of Columbia v. Comer that a Missouri religious preschool could use taxpayer funds for a kindergarten.

In her dissent, Sotomayor referenced the court’s sharp right turn on this issue. “In just a few years [since Trinity], the Court has upended constitutional doctrine, shifting from a rule that permits States to decline to fund religious organizations to one that requires States in many circumstances to subsidize religious indoctrination with taxpayer dollars,” Sotomayor wrote.

Of the Supreme Court’s nine justices, six graduated from Catholic high schools. Amy Coney Barrett, the newest justice serving during the current term, not only went to a Catholic high school in New Orleans but later obtained her law degree from and taught at Notre Dame, the most prestigious Catholic university in the U.S.

“Today, the Court leads us to a place where separation of church and state becomes a constitutional violation,” Sotomayor concluded in her dissent.

“If a state cannot offer subsidies to its citizens without being required to fund religious exercise, any state that values its historic antiestablishment interests more than this Court does will have to curtail the support it offers to its citizens,” Sotomayor added, noting her “growing concern for where this Court will lead us next.”

Want the best of VICE News straight to your inbox? Sign up here.