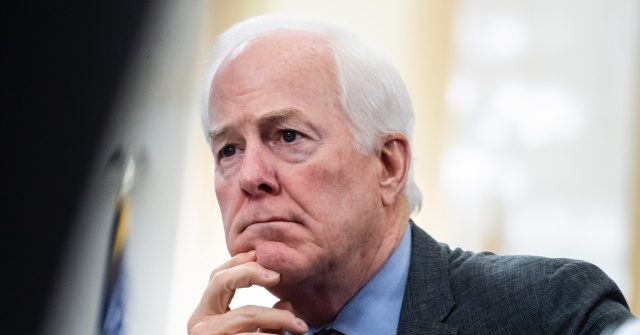 Sen. John Cornyn (R-TX) has attacked criticism of his new civics bill by comparing it to a “Russian” disinformation campaign — all for pointing out that the legislation is vulnerable to Democrats’ efforts to impose Critical Race Theory.

Cornyn’s outburst appeared on Twitter on Sunday, in response to an article by respected conservative author Stanley Kurtz:

The false, hysterical claims are untrue and worthy of a Russian active measures campaign, not a serious discussion of our bill.

Kurtz had written an article, “Bogus ‘Civics’ Bill Will Push CRT on States,” in the National Review in which he pointed out that despite some of the good intentions behind the “Civics Secures Democracy Act” (CSDA), it gave federal bureaucrats the power to impose left-wing ideology, using billions of dollars in federal funding to entice states to adopt a preferred curriculum. Kurtz compared it to Common Core, which began with conservative support but was abused by the left to impose its radical ideas.

It doesn’t matter that federal law and the bill itself disclaim the authority to formally impose a curriculum on the states. The strings that Biden’s bureaucrats will attach to these massive federal grants will suffice to lure states into adopting CRT. The left-leaning bureaucrats who staff education departments even in red states already favor CRT (those bureaucrats will write the grant applications and divvy up the money). And Biden long ago signaled his intention to prioritize applications that promise CRT.

If CSDA passes this summer, as its sponsors hope, a Republican victory in the midterms will come too late to prevent the federal imposition of CRT. But what will happen when voters discover just months before the midterms that Republicans have betrayed them by using federal power to push CRT on the states? The Civics Secures Democracy Act is education madness and political suicide all wrapped up in one.

In an earlier article, Kurtz noted that Cornyn had first tried defending his bill against criticism that first emerged at Breitbart News. The problem, Kurtz wrote, was that the bill’s formal language against establishing a formal federal civics curriculum, left-wing activists could still do so: “The danger that I and others have long warned of in both Common Core and the present case is that of a de facto national curriculum, not a legally literal one.”

Kurtz has been writing about such problems for decades. In 2012, in his book Spreading the Wealth: How Obama is Robbing the Suburbs to Pay for the Cities, Kurtz warned that then-President Barack Obama intended to use federal policy to reduce suburban self-government and redistribute resources from suburbs into the failing cities from which many residents had fled.

In that case, too, as Breitbart News noted at the time, Kurtz warned about the consequences of concentrating too much power in the federal government.

The use of the term “Russian disinformation” to dismiss legitimate criticism has been a familiar tactic of the left in recent years. It was used most infamously to deny the authenticity of Hunter Biden’s recovered laptop.

Last weekend, Sen. Cornyn was booed at the state convention of the Republican Party over his support for bipartisan gun control measures in the aftermath of the mass shooting in Uvalde, Texas. These include “red flag” laws that theoretically allow guns to be taken away from people who are a danger to themselves and others. Critics suggest that such laws could be abused by political opponents — as Rep. Eric Swalwell (D-CA), among others, has suggested critics’ guns be taken away.

Joel B. Pollak is Senior Editor-at-Large at Breitbart News and the host of Breitbart News Sunday on Sirius XM Patriot on Sunday evenings from 7 p.m. to 10 p.m. ET (4 p.m. to 7 p.m. PT). He is the author of the recent e-book, Neither Free nor Fair: The 2020 U.S. Presidential Election. His recent book, RED NOVEMBER, tells the story of the 2020 Democratic presidential primary from a conservative perspective. He is a winner of the 2018 Robert Novak Journalism Alumni Fellowship. Follow him on Twitter at @joelpollak.