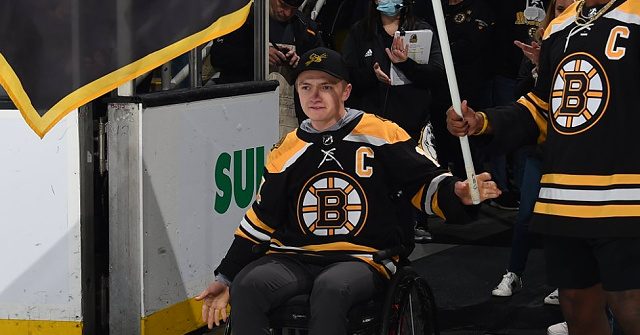 A determined Massachusetts teen walked his high school graduation stage Friday after sustaining a hockey injury last September that left him paralyzed from the waist down, WCVB reported.

Video posted to Twitter by @crobahh_1, seen below, shows 18-year-old Jake Thibeault rising from his wheelchair with the help of two classmates and then walking the Milton Academy graduation stage with a walker as spectators meet his inspiring moment with thunderous applause.

A promise made and kept as ⁦@MiltonAcad_puck⁩ player Jake Thibeault walks to accept his diploma today in front of classmates and teammates just nine months after a devastating on ice injury. pic.twitter.com/jmSr4GGiSS

The teen had set the goal of walking his graduation stage months ago after suffering a pair of broken vertebrae and a “small brain bleed” during a hockey game, WCVB reported. Thibeault’s injury occurred on September 4 when he hit the boards head-first after a collision “with an opposing player,” the Patriot Ledger reported.

“The shift before my injury, I skated down the left side, cut to the middle, I scored, and then I remember going on faceoff, and then I don’t remember much from there,” the teen told the outlet.

He was taken to Umass Memorial Medical Center in Worcester, MA, where rods and screws were loaded into his spine to steady it, and a conversation with a doctor threw a grim forecast on the future. Thibeault said he was informed that his chances of walking again were “low,” but the Fitchburg resident is a scrapper.

“I’ve been kind of an underdog in hockey and in multiple things where I’ve had to go that extra mile,” he told the Patriot Ledger in February. “I’ve had to work a little extra harder. Those years of having to fight hard for what I want has helped me to now face the biggest challenge yet and, hopefully, I have to ever face.”

After leaving Memorial Medical Center, he went to Spaulding Rehabilitation Hospital in Charlestown, where he told the Patriot Ledger he forged lifelong friendships with the caring staff. Following his time at Spaulding, Thuebeault “spent several months of outpatient rehabilitation at Journey Forward in Canton” with the intention of walking at graduation.

“It’s definitely on my mind and we’ll see,” Thibeault told the Patriot Ledger in March. “We got a couple of months at least, so I got to keep grinding away at it.”

Thibeault, a young man who simply knows how to persevere, saw his goal materialize Friday.

“(It was) just an overwhelming feeling of being proud for Jake,” the teen’s father, Mike Thiebault, told WCVB. “(I was) never more honored to be his father.”