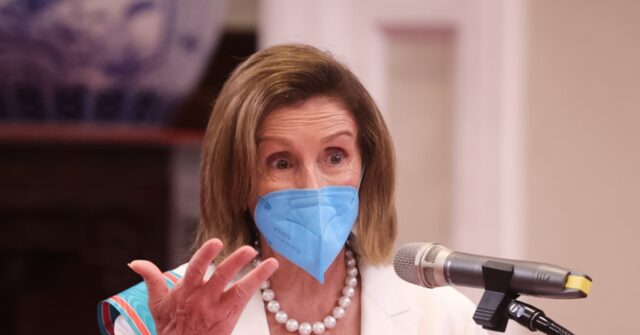 Speaker of the House Nancy Pelosi (D-CA) departed Taiwan late on Wednesday after a 19-hour visit that included visits with that country’s legislature and President Tsai Ing-wen – and an ongoing barrage of hateful invective from neighboring China, including live fire drills and threats to shoot down Pelosi’s plane.

Pelosi’s is the first visit by an American politician of such high rank to the country in 25 years. America does not recognize Taiwan as a country – a decision made by President Jimmy Carter to appease the Chinese Communist Party – despite its clear status as a sovereign nation independent of Beijing. The Communist Party claims Taiwan as a rogue province and dismisses Tsai’s government as an illegitimate “separatist” organization.

Beijing also does not maintain any diplomatic ties to a country that recognizes Taiwanese statehood.

Pelosi, in a Washington Post column on her visit and several statements and remarks throughout her trip, emphasized that she did not intend to change the status quo of failing to recognize Taiwan’s statehood but maintaining friendly relations between Washington and Taipei. Her stance did not stop the Communist Party from condemning Pelosi, surrounding Taiwan with its military assets, and demanding leftist President Joe Biden violate America’s separation of powers to limit Pelosi’s ability to travel.

China’s military announced that it will conduct a series of live-fire drills surrounding Taiwan from Thursday to Sunday.

The island’s defence ministry said in a statement on Wednesday that the military exercises “intended to threaten our major ports and metropolitan areas.” pic.twitter.com/qLiDV3eSnN

Addressing the ongoing barrage of propaganda against herself from Beijing – which included an illustration of her in Chinese state media as a suicide bomber – Pelosi told reporters in Taipei that China’s opinion of her visit “doesn’t really matter.”

Pelosi told a Channel News Asia reporter that she did not understand why China “made a big fuss” about her, according to that outlet, but speculated it could be due to “certain insecurities on the part of the president of China as to his own political situation that he’s rattling the saber.”

“But it doesn’t really matter,” Pelosi concluded. “What matters to us is that we salute the successes of Taiwan. We work together for the security of Taiwan. And we just take great lessons from the democracy.”

The Chinese Foreign Ministry published a long screed on Tuesday condemning Pelosi, Biden, and America in general for exhibiting any support for the free and democratic society in Taiwan. 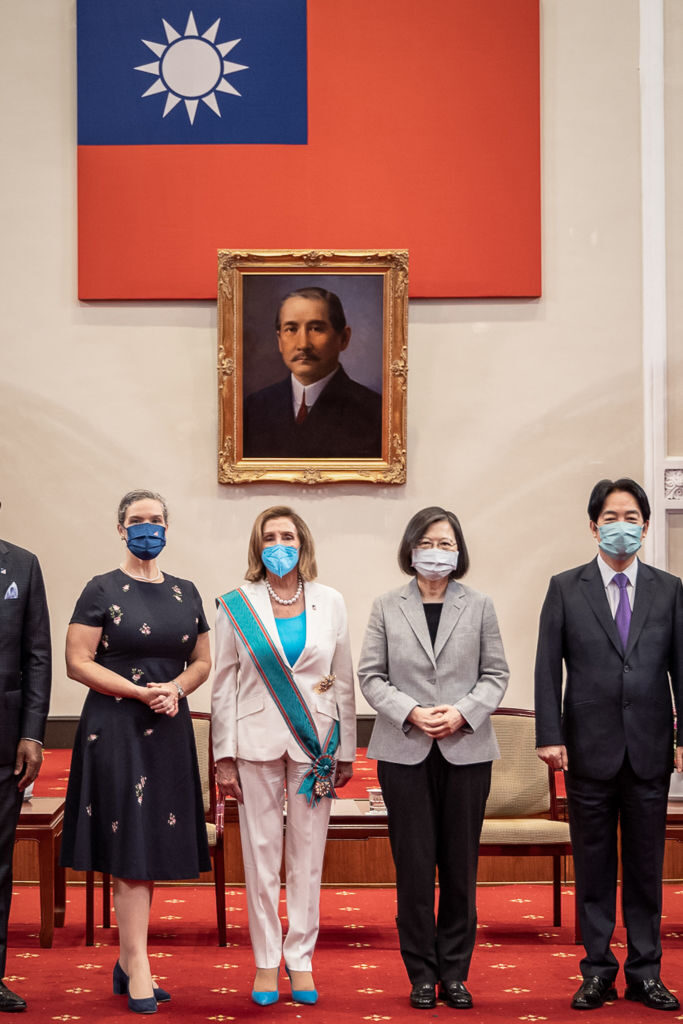 “China is all along opposed to the visit to Taiwan by U.S. congressional members, and the U.S. executive branch has the responsibility to stop such visit [sic],” the statement read in part. “These moves, like playing with fire, are extremely dangerous. Those who play with fire will perish by it.”

Threatening to burn anyone who supports Taiwan to death is a common refrain from the Chinese Communist Party, most recently deployed by dictator Xi Jinping in a conversation with Biden last week. In 2019, Xi vowed that anyone who supported Taiwan would have their “bones ground to powder.”

Last week, prior to any confirmation from Pelosi’s office that she would visit Taiwan, top Chinese Communist Party propagandist Hu Xijin urged his government to either abduct Pelosi or shoot down her plane if she attempted to enter the country.

Pelosi dismissed China’s threats in a meeting with President Tsai in which Taiwan conferred upon her the Order of Propitious Clouds with Special Grand Cordon, a state honor meant to recognize Pelosi’s career-long efforts in support of Taiwan. Pelosi has long focused on China as a lawmaker, both as a threat to America and its neighboring states and as a source of potential profit.

A pleasure to meet with @SpeakerPelosi & recognise her longstanding support for #Taiwan. Your visit not only reflects strong #US congressional support for bilateral ties – it also sends a message to the world that democracies stand together in the face of common challenges. pic.twitter.com/Qu0qud3106

“Today our delegation came to Taiwan to make unequivocally clear that we will not abandon our commitment to Taiwan and we are proud of our enduring friendship,” Pelosi said, accepting the honor, stating that she was especially happen to receive it from “a woman president in one of the freest societies in the world.”

In the meeting, Tsai promised to “hold the line of defense for democracy” and vowed to continue expanding Taiwan’s defense abilities, particularly in light of China’s most recent threats.

“We will continue to work with the U.S. Congress as well as the administration to strengthen cooperation in areas such as Indo-Pacific security, economic development, talent cultivation and supply chains so as to further elevate Taiwan-U.S. relations,” Channel News Asia quoted Tsai as saying, dismissing China’s military display this week as “unnecessary.”

Delighted to host @SpeakerPelosi & the #US House delegation to #Taiwan along with leaders from our government & tech sector. Thank you for your principled support for closer bilateral ties founded on our shared values of democracy, freedom & respect for human rights. pic.twitter.com/68aJBJeiOo

In addition to meeting with Tsai and Taiwanese lawmakers, Pelosi and her small Congressional delegation made a final stop at Taipei’s Jingmei Human Rights Park, also known as the Jing-Mei White Terror Memorial Park – an institution erected to honor the victims of Taiwan’s authoritarian government prior to its evolution into a democracy. A small contingent of communists attempted to disrupt that visit, according to Taiwan’s Liberty Times, prompting police to heighten security and deploy bomb disposal vehicles in case of terrorism.

Taiwanese airports received at least nine threats, including bomb threats, on Tuesday in anticipation of Pelosi’s arrival to the country.

Pelosi and her delegation are at press time en route to South Korea.