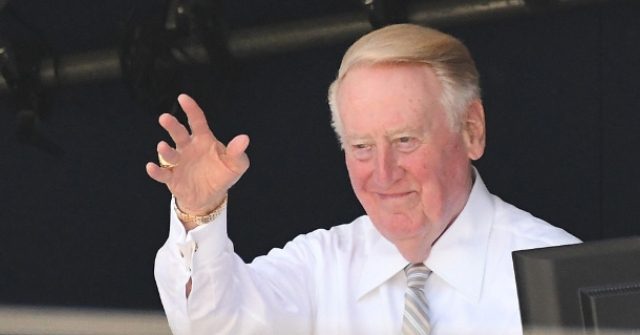 Major League Baseball (MLB) lost a titan on Tuesday with the announcement that legendary Los Angeles Dodgers sportscaster Vin Scully had died at the age of 94.

“He was the voice of the Dodgers, and so much more. He was their conscience, their poet laureate, capturing their beauty and chronicling their glory from Jackie Robinson to Sandy Koufax, Kirk Gibs to Clayton Kershaw,” the Dodgers said in the announcement Tuesday night. “Vin Scully was the heart of the Dodgers and in so many ways, the heartbeat of all of Los Angeles.”

Dodgers president and CEO Stan Kasten hailed Scully an “icon” and “one of the greatest voices in all of sports.”

“He was a giant of a man, not only as a broadcaster but as a humanitarian. He loves people. He loves life. He loves baseball and the Dodgers. And he loved his family. His voice will always be heard and etched in all of our minds forever. I know he was looking forward to joining the love of his life, Sandi. Our thoughts and prayers go out to his family during this very difficult time. Vin will be truly missed.”

Scully’s passing comes just a little over a year after his longtime wife, Sandra, died from her battle with ALS.

In 1982, he landed a spot in the Baseball Hall of Fame and was awarded the Presidential Medal of Freedom in 2016 for his years in sports broadcasting.

Breitbart News Editor-in-Chief Alex Marlow hailed him as a man who “brought character, class, and respect for tradition to America’s pastime and the broadcasting profession itself,” recalling Andrew Breitbart’s endearing affection for him.

“Vin Scully was like family to countless Los Angelenos whom he would never meet. Andrew Breitbart, the biggest Scully fan I’ve ever known, once joked to me that he sometimes felt closer to the famed Dodgers broadcaster than his own father — which is saying something because Andrew loved his dad,” said Alex Marlow.

“Personally, I heard his voice more times growing up than any adult who wasn’t my parents. I know our experiences were not uncommon. He brought character, class, and respect for tradition to America’s pastime and the broadcasting profession itself,” added Marlow. “Anyone who becomes the best in the world at what they do deserves recognition, but Vin has an extra special place in the hearts of the Dodger fans of Breitbart News (perhaps especially our CEO and President, Larry Solov). We salute you, Vin Scully, and thanks for all the memories.”