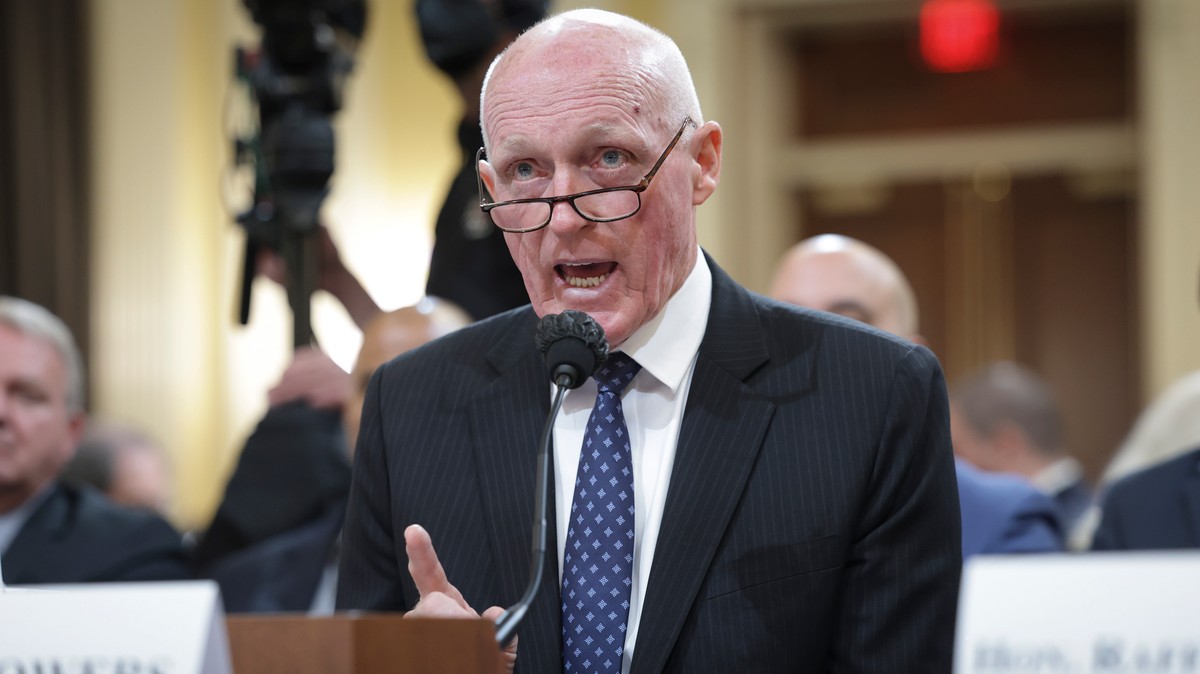 One of the key figures who stood up to then-President Donald Trump’s chilling campaign to reverse his election loss in multiple swing states laid out in excruciating detail the extraordinary pressure Trump and his allies put on him during that effort—and the subsequent threats he’s faced since.

Bowers said the pressure campaign began shortly after the election, when Trump and Giuliani called him and asked that he allow a statehouse hearing to examine “evidence” that there had been widespread voting fraud.

Bowers said he refused the hearing because he didn’t want to offer any legitimacy to the “circus” of conspiracy theorists pushing those claims without any actual evidence.

But that was just the beginning.

Bowers said Giuliani, with Trump on the line, asked that he “remove the electors of President Biden and replace them” with a slate of Trump electors.

“It is a tenet of my faith that the Constitution is divinely inspired,” Bowers said. “For me to do that because somebody just asks me to is foreign to my very being. I will not do it.”

Arizona was one of seven states where Trump and his team tried to overturn his election losses by getting Republican lawmakers to block the certification of the election. When that failed, they put up fake slates of rival electors that they hoped Congressional Republicans would just accept as real.

If the Republican legislators that Trump pressured had folded and gone along with his coup plan, it would have triggered a severe constitutional crisis that would have made the Jan. 6 riot pale in comparison—and could have led to success for Trump’s coup efforts.

The overwhelming pressure from Trump’s team was only matched by its utter lack of evidence. Bowers said Giuliani and Trump attorney Jenna Ellis repeatedly promised to show him the evidence—but never produced it. At one point, Giuliani finally admitted that he didn’t have hard evidence to prove such a serious charge.

“In my recollection, he said, ‘We have lots of theories; we just don’t have the evidence,’” Bowers said Giuliani told him. “And I don’t know if that was a gaffe, or maybe he didn’t think through what he said.”

Bowers said that in a later call Eastman told him he should just “decertify the electors” and “let the courts sort it out.”

“I said, ‘You’re asking me to do something that’s never been done in history, the history of the United States, and I’m going to put my state through that without sufficient proof? And that’s going to be good enough with me? That I would put us through that—my state that I swore to uphold, both in Constitution and in law? No, sir.’”

On Tuesday, Trump claimed Bowers told him in a November 2020 phone call that “the election was rigged and that I won Arizona.” Bowers said that Trump’s description of the call was “false.”

The pressure campaign continued, Bowers testified, right up through the morning of Jan. 6, 2021. Bowers said that Arizona Rep. Andy Biggs, who was then the outgoing chairman of the House Freedom Caucus, called that morning to ask him to decertify Arizona’s election results.

Bowers continues to face threats for standing up to his party’s president.

He testified about the ongoing threats and hostility towards him from pro-Trump agitators since the election, including multiple confrontations at his home.

At one point, Bowers said he saw a man armed with a pistol with “three bars” on his chest—he presumably meant the symbol of the III%er militia movement.

He said that pro-Trump protesters have showed up at his house with signs accusing him of being a pedophile and a pervert. He said that upset his wife and his gravely ill daughter, who later passed away.

“It was disturbing,” he said.