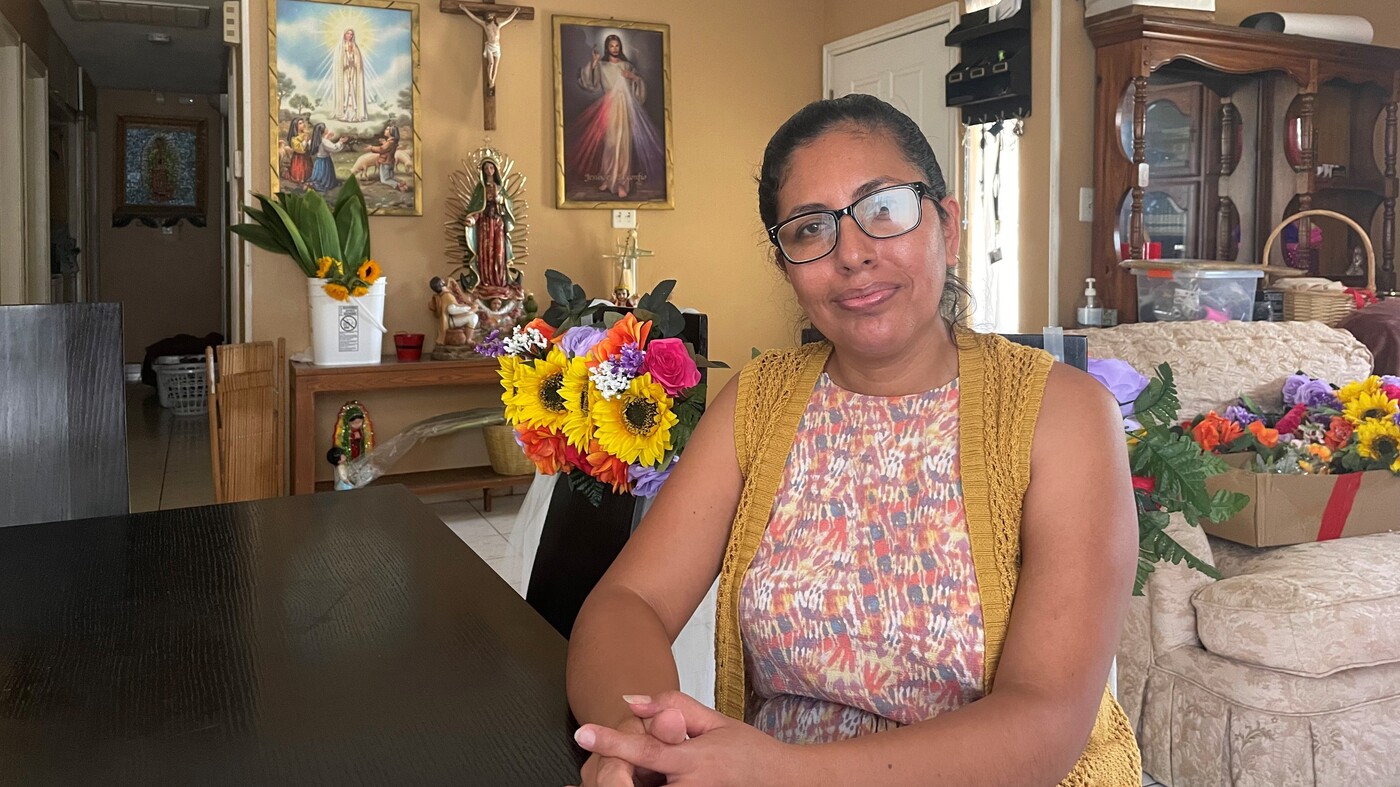 Minerva Contreras, 44, connects climate change to her health because she has a lung problem that makes it harder to breathe on hot days. Keeping her house near Bakersfield, Calif., cool costs as much as $800 a month in the summer.

Minerva Contreras, 44, connects climate change to her health because she has a lung problem that makes it harder to breathe on hot days. Keeping her house near Bakersfield, Calif., cool costs as much as $800 a month in the summer.

From higher electricity bills to worsened health, more than half of Americans have felt the impacts of extreme heat, according to a new survey released by NPR, Harvard University and the Robert Wood Johnson Foundation. That percentage is even higher in California, where heat was the top climate impact, reported by 71% of those surveyed.

“California does have low rates of air conditioning in homes, maybe because it’s blessed with cool breezes in a lot of parts of the state, but when an extreme heat event comes and there’s no cool air available, you’re in trouble,” says David Eisenman, a doctor who directs the UCLA Center for Public Health and Disasters. “That’s why you’re seeing this higher number.”

Nationally, poll results underline how people consciously connect climate change to their health. Nearly one-quarter of those who experienced extreme weather in the past five years said someone in their household had a serious health problem as a result. And perceived health impacts don’t fall equally, according to poll respondents: Overall, 11% of Americans personally affected by heat say their households have faced serious health problems resulting from a lack of air conditioning in their homes. Even greater shares of Native American, Latino, Black and Asian adults agreed with that sentiment.

Do it yourself cooling tricks aren’t enough anymore

The percentage of Californians who say air conditioning is a factor in their health is also elevated, according to the survey.

That doesn’t surprise Democratic Assemblywoman Luz Rivas, who represents the eastern San Fernando Valley of Los Angeles, where she grew up in a home that sometimes lacked air conditioning. According to Rivas, land use policies, including historical redlining, worsened urban heat for the sweltering neighborhoods she knows well.

“With very few trees and other ways to keep communities cool, families like mine have suffered from heat for decades,” Rivas says. On hot days, she recalls that her mother used to take her to the mall to cool down. “Now that these heat waves are getting longer, our coping mechanisms that we have used in the past are not going to work as well.”

Under legislation Rivas is sponsoring, the California Environmental Protection Agency would create a heat wave ranking system that would be used to broadcast public warnings. “It’s something that’s similar to what we already do for hurricanes in other states,” she says, adding that ranking heat waves would help the public “know the severity of the heat wave and then learn what they should be doing in those instances.”

In a letter of support for the bill, public health officers, emergency room physicians and health researchers pointed out that the health risks of heat are worse for Black Americans and Latinos, outdoor workers and city dwellers, writing that “in an average Los Angeles summer … there is an 8% increase in total mortality on the hottest days.”

But “we are not tracking the health harms of heat events in any way that is really useful,” says UCLA’s Eisenman, who added that tracking climate change in health is important in places like California, where people may suffer health risks from multiple disasters at the same time, including spiking temperatures and raging wildfires. The NPR/Harvard/Robert Wood Johnson poll bears that out; separate from heat, in 36% of households affected by wildfire, Californians reported serious health problems. And some households reported impacts from heat and from wildfire.

“That combination of smoke and heat is where the future looks really bad for California,” he says.

Ranking heat waves is one of several proposals that would go further than the recommendations in California’s extreme heat action plan, announced earlier this year. California lawmakers are also considering legislation that would make indoor cooling a housing right.

Air Conditioning is a necessity, but could cooling be a right?

The proposal would particularly help renters like Minerva Contreras, a 44-year-old mother of two who lives near Bakersfield, Calif. In the past, her neighborhood averaged 42 days where temperatures soared past 100 degrees; last year, Kern County racked up 67 days that hot, and projections are for that number to keep climbing.

“It is very difficult because, since it is practically like not being able to breathe,” Contreras says, in Spanish. “It’s frustrating.”

When she’s well, Contreras works in agricultural fields picking anything from tangerines to radishes. But she has developed a lung tumor. It’s benign, but it makes hot days harder. Contreras points out that other people who are also sensitive to heat live all around her, including the very young and very old; Kern County’s asthma rates are above state and national averages.

Indoor cooling standards have won support of tenants, housing advocates and editorial writers, but they face a serious fight in Sacramento. Property owners represented by the California Apartment Association argue that the cooling standards bill “circumvents California’s building code adoption process and ignores the variety of climates present in the state,” and if passed the law would be the first such state-level requirement in the country.

For now, the cost of keeping cool for millions of California renters mostly falls on them.

Behind her modest brown ranch home, Contreras shows off an asador, a grill that her husband built for her. She’s got pots out here too, for making chicharrones and tamales. When she cooks for dinner, she tries to do it early in the morning, before the sun comes up.

Across the backyard, she has strung several laundry lines; she hangs bulky towels and blankets and most of her clothing out here to dry in the sun.

These are health measures, she says; it’s essential to avoid doing anything that makes it hotter inside. “I definitely need to be in a cool place,” she says.

It also helps save some money. In summer, their electricity bills run between $600 and $800 a month; after the landlord spent $3,000 to fix the air conditioning, he raised the rent to $1,300. Minerva is planning to pay this summer’s electricity bill off in installments through next January.

She isn’t optimistic California will pass cooling standards — yet. “I would like it very much, but I always think that money wins more than everything,” she says.