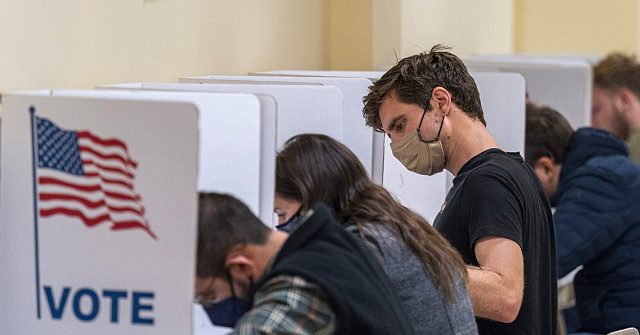 Voters in Alabama, Virginia, and Georgia head to the polls on Tuesday to select key candidates in Republican primaries and runoffs, further setting the stage for the upcoming November midterm elections and testing the trends inside the GOP away from the establishment and toward former President Donald Trump’s America First populist vision.

The biggest prize on Tuesday is the GOP nomination for U.S. Senate in Alabama, where Katie Britt faces off against Rep. Mo Brooks (R-AL) in the runoff. Britt, the former chief of staff for retiring Sen. Dick Shelby (R-AL), has won Trump’s endorsement in the final weeks of this race–which came in after Trump revoked it from Brooks earlier, before the first round of primary voting.

Interestingly, the establishment media has framed Britt as an establishment candidate, but nothing could be further from the truth. In fact, she has openly called for change and new blood in the GOP Senate leadership structure, and has championed plans offered by Sen. Tom Cotton (R-AR) that would slash legal immigration levels to the United States. In his statement endorsing her, Trump picked up on this, noting that Britt believes Senate GOP leader Mitch McConnell encouraged now failed candidate Mike Durant to run in the first round to try to stop her.

It is true that Brooks has been more aggressive in his calls for McConnell to go, and Brooks has tried to keep his campaign alive with some last-second endorsements from people like columnist Ann Coulter, but either way in this race the establishment will not be picking up an ally–Trump and America First outsiders will. Britt has taken an explosive lead in the final weeks in polling–in the first round of voting she blew away expectations and finished double digits better than her best polls–so seeing who emerges in Alabama and if Britt can deliver again will be particularly interesting.

Elsewhere, in Georgia, two Trump-backed congressional candidates–Jake Evans and Vernon Jones–face runoff opponents in Rich McCormick and Mike Collins respectively. Trump had a bad night in Georgia’s first round of primaries and both of these candidates finished in second place in that round, but Evans in particular seems to have rallied and Trump last night did a tele-town hall with him urging Georgians to back him.

In Virginia, several congressional primaries will be interesting to watch, particularly in both the Seventh and the Second Congressional Districts. In a state that flipped so hard to the right and elected GOP Gov. Glenn Youngkin last year, Republicans are hoping that momentum continues this year as they seek to oust Reps. Abigail Spanberger (D-VA) and Elaine Luria (D-VA), among possibly others. Nominees against them will be selected on Tuesday.

Technically, Tuesday will also see runoffs in Arkansas–but none of those races have major national significance even though they do matter locally. Follow along here for the latest as the results stream in on Tuesday night. The polls close in Virginia and Georgia at 7 p.m. ET, in Alabama at 8 p.m. ET, and in Arkansas at 8:30 p.m. ET.

Early results are coming in in Georgia as well, and Rich McCormick and Mike Collins both have substantial leads over their Trump-backed opponents in the early numbers.

About 3 percent is now reporting in Virginia’s second district and state Sen. Jen Kiggans has a huge lead with 63.7 percent to Jarome Bell’s 21.1 percent. Kiggans is the odds-on favorite to win this one so her early strong showing is unsurprising.

Per former President Donald Trump’s team, these are the endorsements Trump has on the line this evening:

Polls have closed in Georgia and Virginia. Results are expected to start coming in imminently.